The stylish ‘XUV500 Sportz’ comes with

Sporty Exteriors and is packed with Premium Features 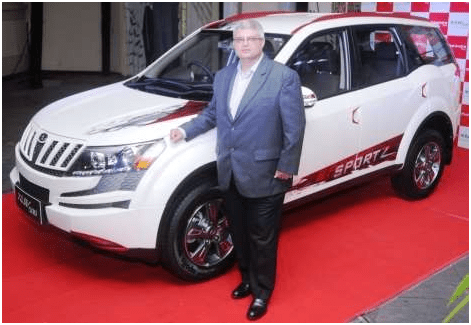 The exclusive features of the ‘XUV500 Sportz’ include:

Speaking on the launch of the ‘XUV500 Sportz’, Vivek Nayer, Chief Marketing Officer, Automotive Division, Mahindra & Mahindra Ltd. said, “We are pleased to introduce the limited edition ‘XUV500 Sportz’ for discerning customers. The Mahindra XUV500, with its winning combination of aspirational styling, advanced technology & safety features, comfort & convenience has already created an impact in the hearts & minds of consumers. This new offering of ‘XUV500 Sportz’ aligns with our leadership position in Indian motor sports & rallying and reflects our ‘Sporty’ DNA very well. We believe that it will create a new benchmark in exclusivity to further enhance the XUV500's appeal amongst customers.”

The company has launched a dedicated webpage for the customers to know more about the vehicle: www.mahindraxuv500.com/xuv500sportz . The ‘XUV500 Sportz’ will be available on the W8 model of the XUV500 and it will continue to have the wide array of world-class, high- tech features of W8 such as:

The XUV500 has received a tremendous response from customers and reviewers alike and has been the most awarded car in its first year, with 22 awards from auto experts & numerous other recognitions for the brand. The XUV500 was rated the 5th best launch of 2011 across all categories by Business Standard Strategist. In the year 2011, XUV500 was the third most searched auto brand on Google India. XUV500 has also been rated the most reputed auto brand in the Reputation Benchmark Study conducted by Bluebytes with a 74% lead over the 2nd most reputed car brand. The XUV500 launch digital campaign was recognized among the Top 5 of 2011 by exchange4media.com. Yahoo India acknowledged XUV500 as a path-breaker among the top 10 car launches of 2011.

The XUV500 has already notched up prestigious wins in the Indian National Rally Championship (INRC) and in ‘Extreme’ category of rally-raid events such as the Desert Storm, & Dakshin Dare. The XUV500 piloted by Gaurav Gill (current Asia Pacific Rally Champion) was the fastest in 4 out of 5 rounds of the INRC last year and won the first ever Indian National SUV Rally Championship. The XUV500 is the first ever diesel powered vehicle to win podiums in the Indian motorsport circuit including the overall victory beating 54 competitors in the Desert Storm 2014.

In 2012, Mahindra featured on the Forbes Global 2000 list, a listing of the biggest and most powerful listed companies in the world. In 2013, the Mahindra Group received the Financial Times ‘Boldness in Business’ Award in the ‘Emerging Markets’ category.

Visit us at www.mahindra.com

Officer and Member of the Group Executive Board