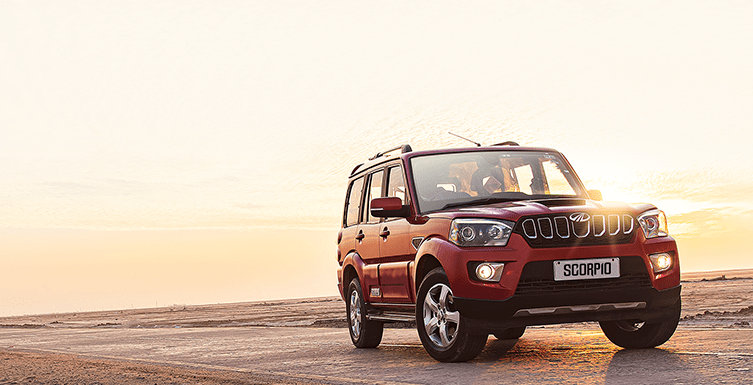 I don't believe in New Year resolutions, but I do believe in improving every year. It could be any type of improvement- honing my skills, learning something new or even making a positive change to my life. Apart from improvements, a new year calls for new beginnings too.

I guess it was time for a new vehicle then, seeing that my current one was biting dust in the garage. I wanted an SUV, one that was powerful and commanding at the same time. One that I could use both on the tarmac and off it.

Then I heard about Mahindra's new All Powerful Scorpio and about all the things that it can do. To be honest, it was my curiosity that made me book a test drive. The first thing that hit me about the New Mahindra Scorpio was its looks. It just looked so dominating that I couldn't help but gaze at it.

This is the imposing effect of its new front grille. This effect holds 1 for the tailgate as well, which has been redesigned to exude elegance with its chrome appliques and rear headlamps. I like it when a vehicle's exterior is bold and mean looking, which is why I really loved the new alloys that Mahindra has used in the Scorpio; they augment its masculine appearance. Leather adds an element of luxury as well as sophistication, but in the New Mahindra Scorpio, it's got character as well with the added blue inserts on the seats. The new premium faux leather is as comfortable as ever, even during long drives

You ever get that feeling that you're powerful? Like really powerful? I got that feeling the moment I put my hands on the new Mahindra Scorpio's faux leather wrapped steering wheel. It just had that kind of feel to it. But then, I turned on the ignition and a beast awakened. Let me put it this way- I really enjoyed driving on the highway. The Scorpio’s upgraded mHawkengine definitely packs a punch! The explosive power of this beast is a surging 103kW (140BHP), augmented with a torque of 320 Nm. The new engine of the All Powerful Scorpio comes with xx cc. There's a 6th generation supercharger too, which elevates its degree of responsiveness

Even changing the gears of the new All Powerful Scorpio feels really smooth and effortless, which is all thanks to its newly equipped 6-speed transmission. When you're in control of a beast, you feel more alive than ever. The sound of the engine roaring and the tires rolling on the tarmac add to the whole experience, giving you an adrenaline rush. Suddenly, the only thing that exists is where you're going and the thrill of being in control of what is getting you there. Perhaps this is what one would refer to as the thrill of driving. While driving, I connected my phone through Bluetooth to the 15cm touchscreen infotainment system to listen to Eye of The Tiger! That's how pumped I was.

The 15cm touchscreen infotainment system also has GPS navigation as well as AUX and USB connectivity, but there's more to it. Parking never felt easier with the rear view that you get on the infotainment system, all thanks to the reverse camera with dynamic assist. I have to admit that I parked faster than I ever have before, and all the credit goes to this amazing feature.

So, what do I think of the Scorpio? I'm buying it! To everyone out there looking to upgrade their experience on the road and off it, please do yourself a favour and test drive the new All Powerful Mahindra Scorpio.