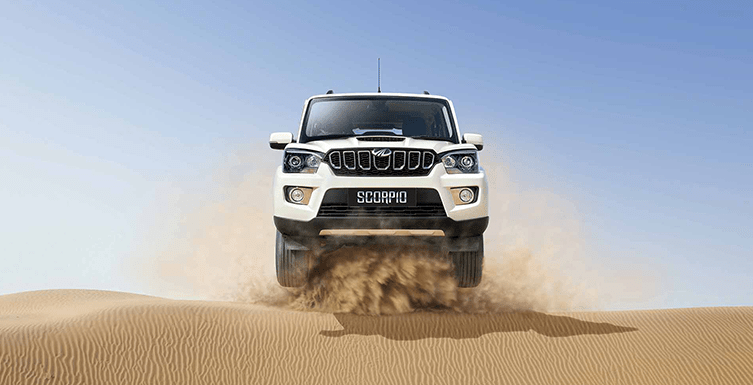 A tiny detail can make your heart skip a beat. Believe me, I know. I still remember the day that I fell in love. It was raining and the world was covered in mud. The sun was hidden behind the clouds and I was standing on the sidewalk. I was so drenched and my day wasn’t going well at all. But then, everything changed. Out of the corner of my eye, I was struck by a sudden radiance, a figure resplendent in diamond white.

If I could say what it was about the Mahindra Scorpio that stole my heart, then it would probably be the way that I could sense its presence before I could even see it. Before it grinded to a halt in front of me, I could hear the sound it made when it sailed through the dirt and grime. It was like the air was announcing its arrival. As it moved, the Mahindra Scorpio even with its bold colours, the looked like it was at ease.

Everything else around it looked like chaos- people running to get out of the rain, random potholes, cars honking at each other. To escape the chaos, all that one had to do was look at this masterpiece in motion. It was gliding. It almost looked like it was made for this. I realized later that it was. I still feel the same way about the Mahindra Scorpio when I see it. Sometimes it’s raining, sometimes it’s sunny and at other times, all you can see are its rear LED lights glowing in the darkness. Now that I know it better, I’ve realized what it was about that first encounter that made my heart skip a beat.

The magic isn’t in the tiny details but in the sum of them. When I saw the Mahindra Scorpio gliding towards me that day, my eyes were fixed on its headlamps and LED eyebrows. It felt a bit like looking at the beast in its eyes. I was so engrossed with its eyes that at first, I didn’t notice its other features- how aggressively it was built, it’s star shaped alloy wheels the striking Scorpio Colours and how could I forget, the way that no pothole could distort its glide. Then it stopped in front of me, and when it did, my vision was overwhelmed with all the details I never knew existed. After getting lost in its exteriors, I thought that I’d experienced the Scorpio in all its entirety until I opened the door and went inside.

To sum it up, I forgot to say hi to my friend who had come to pick me up. To be honest, I experience something new every time that I sit in the driver’s seat; test its superb Scorpio Mileage; the Mahindra Scorpio never fails to surprise me, and that’s why my heart and garage belong to it.